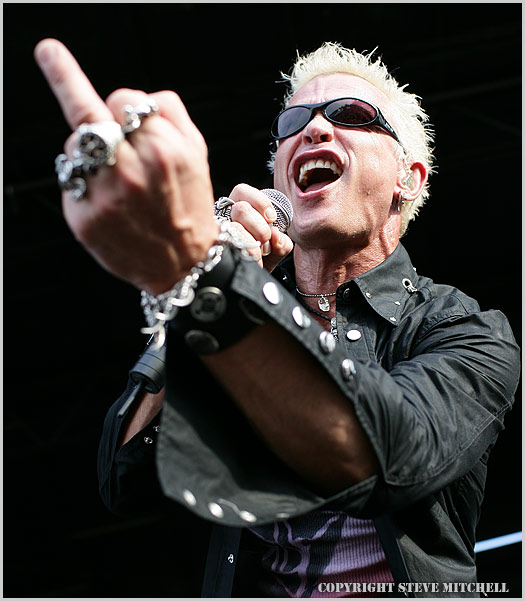 The audience was a complete cross-section. There were Billy’s contemporaries, us teenagers of the ’80s, twenty-somethings, and teenagers and kids. It was exciting to see kids in Rancid hoodies rocking out and loving one of the original punk rockers. And everyone was dancing, singing along and wanting “more, more, more!”

Let’s not forget Steve Stevens, who next year celebrates his 30th anniversary with Billy. Steve is a phenomenon and so exciting to see live. He creates these amazing sound effects that sound very space-agey and trippy and also interjects a lot of flamenco into his solos. The beginning interlude to “Eyes Without a Face” is so ethereal it gives the song new life. And his “Over The Hills And Far Away” bit that follows a full-on flamenco rock-out now includes a “Stairway To Heaven” teaser that sent the crowd into a frenzy. Steve flat-out rules, clearly enjoying every minute of his performances. He brought out the pink Hello Kitty guitar with the fuzzy fuchsia strap for “Mony Mony” and the audience loved it.

If you have even a passing Idol fancy, do yourself a favor and head to the Fillmore tonight or catch him on his next visit. Billy has always been the consummate entertainer but dare I say his shows today are even better than in his “heyday”. Satisfaction guaranteed.

The Queen Mum summed up last night’s performance by saying, “He is just so cute up there!” Quite right.