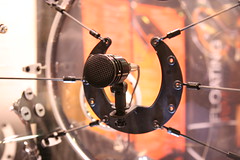 As I was contemplating a post on the topic of recording preparation, I received a great comment from RecordingHacks. They turned me on to a new product for bass drum mic placement – the Kelly Shu. Here’s the great review by RecordingHacks.

As fate would have it, I recently purchased a Shure Beta 52A for use as a kick mic, which should serve me well for both recording and live performance. The Kelly Shu looks like a great option for placement of my new mic. Special thanks to the guys at RecordingHacks. Your comment gave me the kick in the pants that I needed to follow through on this week’s inspiration.

My inspiration for recording prep discussion is based on recent experience. A couple of weeks ago, I got into a panic, as the band that I spend most of my time performing was about to start sessions for what will evolve into an album. We have a couple of somewhat new members, who have naturally brought new influences to our music. With new creative influence, our songs have changed significantly, and have done so outside of our group rehearsals. A week before our session, we began rehearsal. The songs, as I heard them at this rehearsal, were filled with new rhythmic changes. Not a huge problem, except that the feel within these songs had changed enough that my existing drum grooves no longer pulled things together as they should. With only hours of rehearsal time, rather than days, my panic began. I fortunately had one good day of rehearsal to sort this out, but this brings me to my point.

As a drummer, preparation is priceless. This is particularly the case when you have ample time to share ideas with your collaborators. I happen to be a drummer with a considerable amount of opinion and enthusiasm for arrangements. My bandmates are also extremely creative. In a situation where preparation is minimal, there will be lost opportunity for the type of full collaborative development that fosters quality performance. My advise to drummers is to spend as much time as possible sharing ideas prior to your recording session. Do so until you’re satisfied that you’ll be able to give your best performance.

I like to say that there’s no do-overs with recording. One of my bandmates points out that you can always rerecord. He’s right, however, I contend that a session done outside of one’s comfort level either gets canned or goes on record as a performance that should have gone better. Another of my bandmates wisely says that recording is all about time. He went on to say that first track is often the first to be scratched. I may be thankful of this fact as our recording project progresses.

As a drummer drawing from this and another recent session experience, my suggestion is this. If your planning to record with a group of musicians with whom you work regularly, be conscious of your creative and collaborative prep time. Meaning, give yourself plenty of time to get comfortable with what you’re planning to record. If you’re recording project is more as a session player, share your ideas in advance of the session. If you’re set up to demo your ideas in advance of the session, all the better. The option to creating a pre-session demo for your collaborators, is a live rehearsal. Ample preparation with your collaborators will result in a much higher likelihood of your performance being one with which everyone is happy. All of this said, I found myself in need of “going with the flow” for this most recent session.

Fully prepared or not, the work ethic that applies to live performance and session work is the same. One must always strive to give their best; and preparation goes a long way toward achieving one’s best. There really are no do-overs.