Justin Markovits (aka Plumber Drummer) is a fantastic SF Bay Area drummer and friend who I first saw at then hopping JJ’s Blues Bar of San Jose, California back in 2006. At that time, JJ’s was still well known for hosting great blues acts and consequently, great drummers. I happened to catch Markovits performing with Chris Cotton. The two had previously been part of an exceptional ensemble called Blue Eyed Devils. Justin brought a unique style and unforgettable edge to Cotton’s show, and I’m quite sure he’s doing more of the same today.

Some months after seeing Justin perform with Cotton, while at a Redwood City rehearsal studio, I chanced upon a fusion project called Trip. They were rehearsing in a one of the studio rooms, and their drummer was none other than Markovits. I consider myself lucky to have met and become friends him. We even got to perform together on a couple of occasions.

Justin is one of those uniquely gifted players that can play with an extraordinarily busy style, while managing to create space for those around him. He also has an artistic side that lends itself to creating percussion gadgets and set-ups that most couldn’t imagine or dare to try. By the time we met, he’d toured and played with a number of great acts, including Chris Cotton, Shanty Town Vacuum Tree Head, and Trip.

What’s with the nickname?

Markovits developed a side career as a licensed plumber, and is hence the self-anointed Plumber Drummer.  Today his business is a thriving full-time career with five employees. Amazingly, the guy makes time for serious original music projects, including touring. 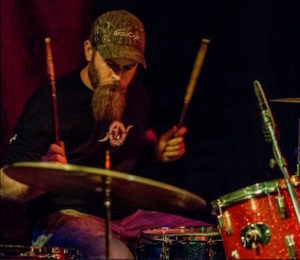 I had a chance to catch up with Justin recently, and learned that he was involved in a recent film score project that took first place at the Cinequest Film Festival. The band he did this with is a trio called Mean Faces, and the film was The Rugby Player. He tells me that they’re already working on another film score project. It’s apparently been a year and a half since they played live, because of these film projects, but it sounds like they’re having a great time.

Another project Justin has going on is one called Purple Fox Heebie Jeebies. These guys are starting to get noticed too, although it’s a little too early for me to make mention by whom. I can tell you that he had a number of shows upcoming with these guys, including performances in Mountain View, San Jose and San Francisco. Other work he mentioned in our recent call was with country band The Bitter Diamonds and a dream gig with Charlie Hunter.

I’ve been practicing and playing almost all my shows on this Rogers kit. It has a HUGE sound and is very comfortable for me to play on. I will probably always have my DW Custom Series, but it’s mainly become my recording/studio set.