Get Paid as a Pro Drummer

Getting paid as a pro drummer can be a tough gig in and of itself.

I wrote this post to give drummers ideas to consider for making money as a pro. If you happen to be a non-drumming musician, there’s plenty that applies to you too. The avenues and strategies here are all discussed from a high level, but I’ve done my best to include resources where you can learn more.

A few of my good friends and acquaintances manage to get paid and actually make a living as a full-time drummer. One of them even spent much of that career in music celebrity. Agreements are a key ingredient to doing it the right way. While it’s important to always be the best you can be as a musician, it’s always a good idea to understand what you’re signing up for. If you’re being hired to do a six-hour recording session at a given fee, it should be pretty spelled out for you. If you’re helping people create music and you want credit, you’d better make that clear up front, and get an agreement in place. If you’re asking for songwriting and publishing credit, it’s gonna be expected that you contribute to the creative process. If you’re honestly capable of doing this, and your co-writers acknowledge your creative abilities, you’re in a good position to put an agreement for shared credits in place. Otherwise, don’t expect that your mere presence in the room where music is being created to get you songwriting or publishing credit.

Learning When to Say No to a Gig 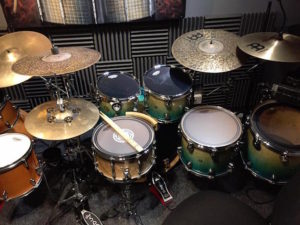 Saying no to some gigs is a necessary part of getting paid as a pro drummer. Most great drummers I’ve known went through an early period of taking every gig that they could. The point of doing this was to learn and network. As your journey continues, you may come across gigs that don’t necessarily pay well, but for various reasons are worth doing. Situations like helping a fellow musician out, or donating a little playing time for a charitable cause come to mind; but one has little hope of getting paid well if they’re doing too many low-paying or free gigs. Let your life experiences tell you what gigs are worth playing and who is worth playing with.

Be on time and have a positive mental attitude, because no matter how good you are, nobody wants to work with an asshole.
––Klozd Sirkut, Marmalade

Among the most sound advice for making money as a drummer is to become a songwriter. Yeah that probably means picking up another instrument, but not necessarily. You could also craft your skill as a lyric writer. If you’ve followed the band Rush at all, you know that Neil Peart penned the majority the band’s lyrics. The bottom line is that investing in the endeavor of becoming a songwriter will be a worth the time and money. If you’re passionate about music, and nurture your songwriting skills, you’ll earn a legitimate claim to writing and publishing credits. Done correctly, this can translate into recurring income.

Another avenue for making money as a pro drummer is through the creativity of beat making. As a drummer, you should in theory have an affinity for this.  Check out Beat Making Lab and BeatTips.com, both very cool resources on the topic. Now I admit to being clueless in the world of beat making, but I reached out to AnnoDomiNATION for insight. They pointed me to a great video and blog post on ways to make money selling beats, which you should definitely check out if this is something of interest to you. I gathered that this video and blog post wasn’t published super-recently, and suspect that it’s a fast changing space. I heard and read enough, however, to determine that there is still plenty of relevant information there; but I also did a little follow-up work for you. AD tells me that the core principles have remained the same since this online “beat selling” industry started. He added, however, that nowadays there’s more competition and that everything is more professionalized, so it’s important to stay innovative. AD’s video presents a top 10 list that includes licensing arrangements, MP3 downloads, TV placement, Internet radio and more. Like many career avenues, I imagine that this is a long term play that requires not only talent and creativity, but education, persistence and relationships. Hopefully this all sounds familiar.

Licensing for TV, film, video, video games, etc. is yet another big market that one can pursue as a source of income. I’m reminded that CD Baby has become popular resource for music makers; and this includes music licensing. I’ve also gathered that there’s no shortage of service providers who (for a fee), will assist you with licensing. One of the best tips I read here, is to educate yourself. Understanding the business mechanics of licensing will undoubtedly help you make informed decisions, and this will lead to increased potential for income. Like with beat making, there are a number of licensing resource websites that are more focused on providing services than in educating. Here’s one resource worth checking out.

Money for Your Music: The Cold Hard Facts About Music Licensing

This rather dated blog post is a quick read with what appears to be still-relevant informational. It was written for Music Biz Academy.com by John Scott G. (aka The G-Man). You can find his current musings at Golosio Music Licensing and Publishing. Not a great website, but worth looking into if you have questions about licensing. The G-Man appears to make himself relatively accessible.