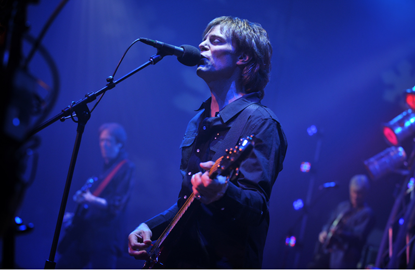 Robert was born in San Jose, went to school at San Jose State University, and lives and works his studio magic in nearby Campbell. He’s had a great career that spans several trends and changes within the music business. Our conversation touches on his music beginnings in San Jose, where a host of good people began to shape his life. The stories he shares are entertaining, sentimental and at times dramatic.

His aforementioned humility really shines when he talks about his music education, a fascinating aspect of which is that he never thought of himself as a very good musician. He started on piano at a very young age, but recalls hating it. He majored to be a music teacher, one of his many backup plans. Although he learned many instruments in college, he doesn’t reflect on his playing as all that proficient. He even goes so far as to say he was a lousy student. He reflects on his early years as a musician in a self-deprecating way, yet his stories reveal a pattern of others taking notice of his skills. As we spoke, I got a sense that it wasn’t just his musicality that people took notice of; I suspect people took notice of his giving personality. At times, he comes across as a bit puzzled by it all, but acknowledges that he’s always tried to deliver lots of value to his bandmates, clients and collaborators.

Today he’ll tell you that he’s all about the bass (and drums). He feels that if the bass and drums are tight, so goes everything else. His studio, which I hope to tour in my upcoming visit to the San Francisco Bay Area, is apparently a museum of instruments and recording technology. Among the collectables are 130 guitars, several amps, synthesizers, and other studio gadgetry. He attributes this collection to the fact that his dad owned a music store. That being said, Robert recalls that he had to pay for all the gear he acquired, despite the family music store. I think he appreciates it as part of his father’s legacy. His dad made him work hard to pay for every piece of gear he acquired in those early years. I actually love this part of our conversation, because it’s as though Robert doesn’t realize to this day that his father had devised a clever motivation game in finding work that helped Robert earn almost enough money for that next piece of gear.

At Sound Tek Studios, he does sessions Monday through Friday, arranging, producing, engineering, and playing parts for clients. He currently plays bass and sings with Greg Kihn, referring to him as the greatest and warmest person he’s ever worked with. Together, Berry says, he and Kihn are filled with ideas. Our conversations about Kihn go pretty deep. Robert also shares his perspective on the music business and the many changes therein. In spite of it all, he seems genuinely happy doing what he does. Frankly, he sounds like he’s on top of the world, catering to studio clients on a Monday through Friday daytime basis, and touring with Greg Kihn. It’s clearly given him much appreciation for others who truly love what they do, something I found to be one of his endearing qualities.

On the marketing side, Robert says (and I paraphrase), “You at least have to go out and act like you’re better than anyone else. People want to live vicariously.” I gathered this is something he’s not personally comfortable doing, but that he admires those who do it well.  While he seems to think that a bit of this rock star narcissism would have served his career, he has clearly done quite well on a philosophy of giving more and serving others.