Say what you will about the Grammys, but it’s not a bad night when hard hitter Dave Grohl and TCV are recognized in the category of Best Hard Rock Performance, taking home an award for the track New Fang from their self titled and perhaps only album. I may be most excited about the award, because John Paul Jones is part of the group. If quick research serves as accurate, this would be only his second to Grohl’s now eighth Grammy–but who’s counting?

It would appear that there’s not much in the works for new recordings or performances as of this post. In the meantime, you can find tons of great videos of the band including this BBC Radio 1 concert. 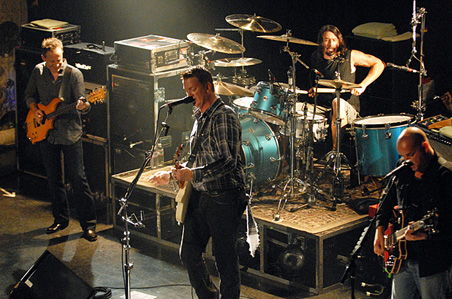 Them Crooked Vultures, courtesy of Pitchfork.com