Make Money as a Musician Booking a Year In Advance

Why I Wrote this Book

(I’m still writing at the time of this post, btw.) 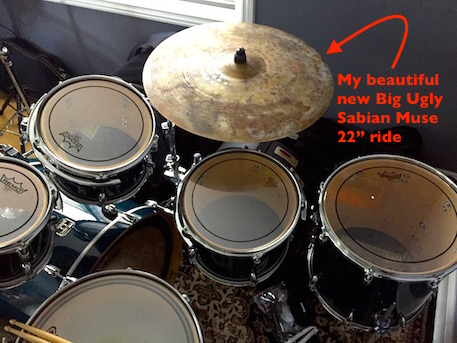 I eluded to as much in the opening pages of this book, but in December of 2013 (early December), I realized that I had a gig booked in every month of 2014. Whoa! That was kinda my reaction. I reflected for a moment to recall how that happened. What I realized is that there were three basic reasons that this happened.

Let’s talk about how I made myself available and what it meant for my 2014 gig calendar. Sometime in 2011, I was growing a bit discontent with one of the two bands I worked with at the time. Typical band drama and personal baggage at work, but my discontent prompted me to seek out other “projects.” Consequently, I’d recently gone through this type of discontent with another band. I sound like a drama queen on drums, right? With all of my predominately self inflicted discontent, I set out to find work with other bands. It wasn’t too difficult for me, as I’d already had a friend asking me to work with him. Turns out he had a  fun project that was going to be needing a drummer. Boom! I got a gig with a band that was at the time, quite busy with bookings. Many of those bookings, quite decent in terms of pay and enjoyment. Then another request came from within this same band. One of the band’s members asked me to play an upcoming gig in his side project. I thought that this was a one-off gig, but as I recall, I was covertly signed up as the band’s new drummer. At this point I was already starting to feel over-extended, so I committed to a limited number of gigs with this side project band. Nice problem, right?

Once I’d made myself available, something else came into play. Relationships. I had venue relationships, as did these two new bands I was working with, not to mention the other two bands that I was already working with; and several of us were  hustling for gigs. It was probably only a moderate hustling on everyone’s part, but when six to eight people in four different bands are working venues for gig opportunities, bookings happen. Several venues started booking  these bands before the end of 2013. Boom! My 2014 calendar filled quite nicely before Christmas 2013; and the offers continued to come in throughout 2014. If this situation of playing in four bands sounds challenging, it was, and it was a bit of a  balancing act. As 2014 rolled on, I got a lot of great exposure and a great deal of practice at performing live. 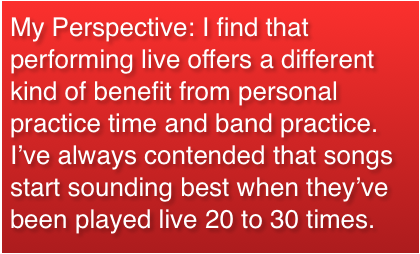 My personal relationships with venues brought my new bands into venues they’d never played before; and these new bands did the same for me. My relationships with the various musicians got me recommendations to even more bands, which led to a number of opportunities to sub for other drummers. If it’s starting to sound like 2013 and 2014 was a long period of overextending myself, it was; but only in the beginning. More on that later. Let me go back to December of 2013. My calendar was filled with gigs covering January through December of 2014. There was an interesting and key reason for this. One of the musicians that was not playing with me in two different bands, had established a rapport with the booking contact for a specific venue, whereby each of those two bands was offered a gig every other month of 2014. This offer was extended in December of 2013. If you followed what I just said, you may be thinking, wait a minute. This guy got a one gig in each month of 2014 because of one guy, or two bands, or one venue. That’s in part true. In reality, I’d already done something similar with venues that I knew personally. By mid January, I had well over twelve gigs booked in 2014. If that still sounds a little complicated, or fortuitous, or whatever, I’m trying to emphasize the power of the relationships that were at work here. It’s somewhat remarkable if you think about it. At any rate, I can’t say enough about relationships. In fact, I’ll say more about them now.

By this point in time, I was making a very conscious effort to impress both my band mates and our audiences. That’s not to say, I wasn’t paying attention to the music around me, to what my band mates were playing. I mean only to say, that I worked hard to do my best at every gig. Man did this pay dividends. New offers came in over the course of 2013 and into 2014. So what did my conscious effort to do my best at every gig mean for me? It meant not drinking before gigs, and drinking only moderately at the gigs. If you don’t enjoy drinking or just have a strict policy of not drinking when you perform, you’re ahead of the game and a better musician for it. It also meant learning my parts well. Very importantly, it also meant listening to my band mates. Hearing the music around me and working to not overplay or play over someone is part of my normal approach to working with bands and fellow musicians. I’m confident in saying that being a good listener, not overplaying and hearing the music around me, is part of why I’ve had the good fortune of being a sought after drummer in my local market. Not everyone does this, so it’s an easy way to set yourself apart from other players. There were lots of other little things like being nice to everyone at the shows, being flexible with bands and venues, dressing well, showing up on time, conducting oneself professionally, and probably other behaviors I’m forgetting. I realize that all of this should be common place, but as hard as I try to be all of these things, I’m always learning how someone else does it even better. There’s always someone to learn from. Always! Check out what these guys have to say on the matter of making money as a musician and performing live.

Did you catch the multi-band effect in this chapter? It strengthened my network. Working with literally 15 different musicians was like hiring a strong sales team. We were selling each other in 2013 and 2014, but from my personal vantage point, they were all selling me in the process. This is the advantage of working with multiple bands. It’s an advantage that I’m still leveraging today.