Make Money as a Musician Playing in Multiple Bands

I’ve been working regularly with four different bands over the past three years, and doing so has helped me get paid gigs. Here’s how and why you can make money as a musician playing in multiple bands.

Control of Your Schedule

Playing for more than one band has helped me control my gig schedule, while requiring that exercise control over my schedule. In 2013, I was working with four bands. Today I work three bands. I’m also working as a sub for two or more bands throughout the course of a year.

My situation has become such that I want to limit the number of gigs I play, and I want to play gigs at venues that pay well, and that are fun to play. With that said, I’m exercising control over my schedule. I’m also exercising control over my schedule logistically. All of my fellow band members exercise some degree of control over their schedules as well. By working with more than one band, I can fill some gaps. As an example, one of my longest standing gigs is with a band that traditionally doesn’t have much availability January through March, and that has also had some limitations on Thursday nights, because one member was taking night classes. We all have external commitments. Even the pros have commitments that have to worked around from time-to-time. Again, here’s the beauty of working with more than one band. If one isn’t available for a Thursday night gig, another one may be available.

Another edge that working with more than one band can have, is that they may have somewhat diverse styles, repertoires or genre focus. This is good for you as a musician, and a great way to have an expanded offering for venues. Perhaps one venue prefers a classic rock sound, while another venue leans toward modern sounds.

Finally, multiple bands means multiple sources of gig revenue. HypeBot.com says it best and says it first in it’s list of ways most non-famous musicians make a living. It also means multiple sources of venues, provided you’re not the only one hustling for gigs. In every band that I work with on a regular basis, there are multiple members hustling for gigs, and contributing to overall marketing efforts for the band (i.e. email blasts, Facebook marketing, print collateral, schmoozing, etc.). Filling my 2014 gig schedule before December 31st 2013, wasn’t all my doing. In fact, half of those gigs were booked by one of my bandmates, a  bandmate who played with me in two different bands. Get the picture? Twelve gigs, two bands. Sprinkle in a several gigs booked by me, a few by another bandmate, and I’m playing three to five gigs a month. The end result was gig revenue from multiple sources.
If you’re the only person working on getting gigs for your band(s), you may want to take a step back and look at the bands your musical circle of influence. There are plenty of great players who are also good marketers and sales reps for their respective music projects. Why not join forces with them? It’s best to bring some effort to the table. If you plan to align yourself with musicians on the criteria that they’re not only talented players, but also good marketers, then be a talented player and good marketer yourself. If you’re devoted to one band, or at a loss for where to find another band to work with, here are some suggestions.

If you’re lucky, your bandmates will show an active interest in helping with the marketing and sales aspect of the band. You may not be so lucky, so here’s how you can start expanding your network. 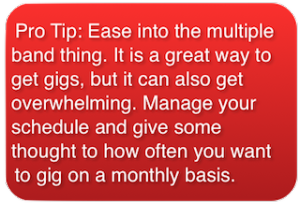 Words of caution when going the classifieds route. Be selective. Always, always, always ask for a demo, and be willing to provide one. Be prepared to decline offers, if they’re not a fit for you. Above all, don’t be a dick. Working with bands in a sub capacity can also reap benefits. Beyond getting hired, you may get introduced to new venues. Certainly any band you sub for plays a venue or two that you’re not currently gigging at. Why not ask questions about these venues. Here are a few good ones.

These are a few questions that come to mind. You may think of others, and your discussion may provide you with insight that you didn’t necessarily anticipate.

When asking for this type of information, it may be appropriate to ask for a recommendation or referral for one of your other bands. Venues are almost always receptive to recommendations from their best acts. Their best acts are the ones that bring people, help sales and retain a crowd. There may be other criteria, but these are the basic ones. Consider this when asking for a referral. Make sure you’re getting a referral or recommendation from a band that does well for the venue of your interest.

While it’s not necessarily for everyone, you can definitely make money as a musician playing in multiple bands. Not only do I do it, many of my peers do it. If working with more than one band isn’t part of your music life, think baby steps. You can always agree to do it as a trial run, or on a short term basis. If it feels right and it’s manageable, make it known that you’re interested in making it a regular thing.