Rock Photographer Neil Zlozower On Being & Shooting the Best 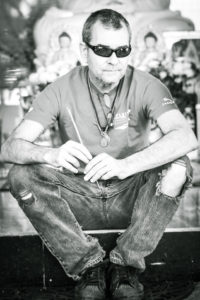 In this episode I chat with rock photographer Neil Zlozower. Neil is considered by many to be one of the best rock photographers of all time, although he refers to himself as merely a “fairly successful photographer.” He’s photographed many of rock’s icons including Zeppelin, The Stones, Van Halen, Motley Crue, Sheryl Crow, Guns & Roses, Eric Clapton, Pantera and many, many, many more. These days Neil spends most of his time running Atlas Icons, an agency he co-founded and that specializes in licensing of music photography. You can find his work at www.zloz.com and atlasicons.com.

WARNING: Neil is opinionated and at times colorful in his choice of words. If you’re easily offended by language or things otherwise non-PC, this episode may not be for you. Consider yourself forewarned.

Neil and I discuss his career, changes in the music business, and the business of photography. Although our conversation didn’t go where I typically expect conversations of this podcast to go, we definitely touch on a few things you can use in your music journey.

In spite of getting a C in high school photography, Neil’s body of work is definitely world class. He describes his early days in photography as a glorified fan, but told me he always wanted to go down as the best in the business. Interestingly, but not uncommon for guests of this podcast, he feels strongly that success is less about talent, but more about business sense and drive.

Neil is openly critical of today’s photographers, yet has nothing but praise for newcomer Igor Vidyashev. Igor’s work is definitely amazing.  Neil says he’s technically retired, but that he still has clients for whom he does work by request. The day before we spoke, he did a shoot for Sheryl Crow. While most of his time these days is spent licensing rock photos  for use by various media channels, he confessed that his favorite pastime is scouring the internet for infringers of his work. Apparently this is more profitable than actually licensing ones work.

Much of Neil’s success can be attributed to his keen eye for bands that would make it big, before they made it big. He claims to have picked Black Oak Arkansas, Ted Nugent, Aerosmith, Van Halen, Quiet Riot, Poison, Ratt, Guns & Roses, and Mötley Crüe as promising acts, before any of them made it; and he worked with them all. He’s seen many changes in music and photography, but has always adapted and found his way to ongoing success, a trick that most of us would benefit from learning.