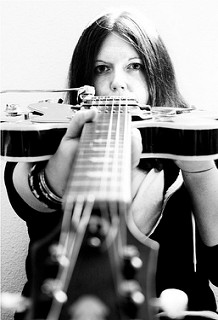 Jana Pochop refers to herself as New Mexican and as a nerd. She’s a singer, songwriter, recording artist, performer, and social media consultant for other working musicians. Social media consulting came about through volunteering for another artist she admires (. That volunteer gig included working a march table, tour support, booking, and eventually social media. We discuss her love of marketing, her journey to Austin, various collaborations, her current (second) Kickstarter campaign, vlogging, and more.

Jana was nearing the end of her second Kickstarter campaign when we recorded this interview. The campaign is for her forthcoming recording project. She’ll be doing said project with one of her all time favorite producer collaborators Daniel Barrett. I’m increasingly becoming a fan of songwriting groups, and was happy to learn that  some of the songs for Jana’s forthcoming release are the direct product of a songwriting group.

Jana recognizes the amount of trust backers of her Kickstarter campaign place in her. She brings this up as we discuss the thought process behind incentive awards. There was a moment of undeniable sincerity in her voice during this part of our chat. The incentives she created are somewhat common, the heartfelt care that went into them is extraordinary.

When I asked about reaching fans, Jana said that she considers herself lucky to have grown up in a digital era. She adds that embracing tech and social media has been “amazing.” She doesn’t share the feeling of overwhelm that many musicians experience. Where social platforms are concerned, she recommends adopting and doing what feels authentic to you. Immediately acknowledging that the word “authentic” is overused these days, she mentions various sources of inspiration. I believe that college, blogs and Facebook collided at just the right moment for Jana. Then there are people like Casey Neistat and Gary Vaynerchuk who have inspired her. Reflecting on the early part of our conversation, she also found and still finds inspiration among her peers. That’s humility.

Jana: I am not a huge believer in trying to change the past or how things happened, as I generally think things happen just as they need to, especially when I am not in charge of the master plan. I guess I would tell my younger self to be braver and follow her gut…fear of the unknown often held me back from making decisions (or making them quickly), and I have learned my gut is usually right. Whether that be moving to a new place or taking a chance and asking for a gig, I’d tell myself to lean a little more impulsive.

Jana: Self-doubt is always haunting my brain! Always. I make stuff. I have somehow carved out a space in my brain to create / write before that voice steps in. I am not quite sure how I nurtured that, but it’s always been there to some extent. Secondly I have a good inner circle around me that are great cheerleaders, but honest ones. I believe them when they cheer me on because they would tell me if I was making a creative misstep or not doing my best work.

Jana: I go in spurts of routine. My first album, The Early Year, was written by me getting up an hour earlier than usual before my government day job. It was a lot, but it got the songs done. This new project I am Kickstarting was largely written while in a songwriting group that turned something in every Sunday, so I had a weekly flow of finishing something new every weekend. I’ve learned not to get too attached to any routine long term, as life is fluid and unpredictable, but I do benefit from short bursts of habit-forming.

Jana: I am fortunate to have a really obvious reason to keep my tribe around this year…a new record. I plan to take all my Kickstarter supporters along with me into the studio via copious amounts of updates and videos. They’re the reason I’m able to be making the record, so I want them to see as much of the process as possible. Then, when the album gets released, hopefully we can catapult a level and find some new folks to join the tribe! The cycle continues!