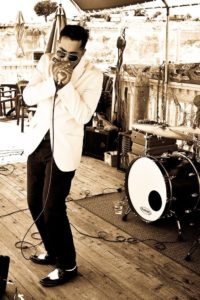 In this episode intro I refer to Aki as a Bollywood blues sensation, not only because his latest album is a fusion of Chicago blues and Bollywood pop classics from Aki’s youth, but also because Aki is so good at what he does, I think he’s likely started what will be seen as a bonafide genre. I’m referring to Bollywood blues.

Aki Goes to Bollywood is a great album, but Aki didn’t start off this way. I first saw him fronting George Brandau’s Chrome Deluxe. Brandau was my featured guest in episode 22. That night I saw and heard a man of Indian decent who sang the blues, played blues harp and entertained at a high level. Yet the final two tracks of his first album Don’t Hold Back are perhaps a foreshadowing of things to come.

In the early days of his love affair with the blues, Aki focused on learning to play harp and performing blues classics and eventually composing his own tunes. It’s probably fair to attribute some of his success to the people he’s surrounded himself with, including the likes of David Barrett, Kid Andersen and Jim Pugh (see show notes below); but Aki is a star in his own right. He’s a fantastic performer/entertainer with a flair for style. He’s also a consummate professional, which I have no doubt contributes greatly to his current success.

An interesting side note is that Aki the blues artist exists at a point in time when the music business is at perhaps its midlife phase of change. Still, I suspect that his dedication to the blues and his Bollywood blues sense of adventure will propel him toward a long and successful career. When I asked him about business and where he’s currently focusing his energy, he said without hesitation– Live performances.