From Piano Lessons to Rap Rock Fusion–Krosst Out 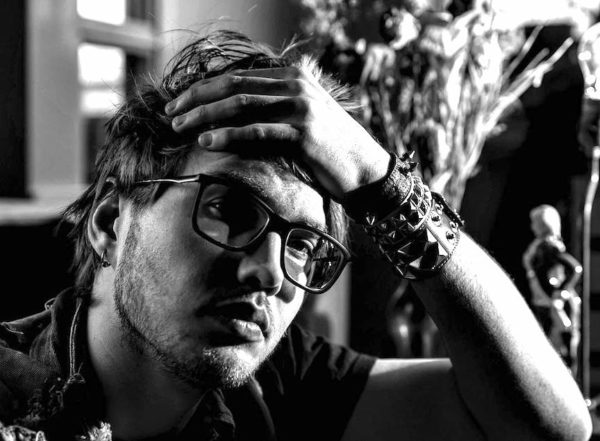 Krosst Out is the first Canadian and first rap artist that I’ve had the pleasure of interviewing for the podcast. He was born in Toronto, but grew up in the small town of Campbellford, a town he describes as a place where everyone wants to fit in. As a kid his interests were focused on the city life and doing his own thing. Today he lives in the city of Toronto, but admits he loves returning to the country town where he grew up.

Like many of the indie artists featured on the podcast, Krosst Out fits into the “up and coming” category. His father was a guitar player, a gigging musician, and a source of music inspiration. His father insisted that KO do something he himself had never done–learn music theory. Piano lessons ensued. Then KO found his dad’s bass, and says–he was hooked. Krosst Out would go on to also learn guitar and drums.

He genrefies his style as hip hop and rap fused with rock. His music influences include rap, metal and rock. Among his favorite artists–Rage Against the Machine, System of the Down, Eminem, and Biggie. But before all of these influences took hold, he’d been exposed to the music of his father–Rush, Dire Straights, Eric Clapton, The Who and The Police.

When I asked how and when he first got into rap, KO begins by sharing that he grew up in a christian household, adding that his parents were unsure about rap music. He listened to christian rappers in the beginning, but by his teens moved on to metal. It was during this time period that he also started playing bass, writing lyrics, and inevitably listened to more and more rap. But it’s the rock influence that provides a certain versatility with regard to venues that will book him.

A DIY approach to touring

Where touring is concerned, Krosst Out takes the DIY approach. He applied this approach in setting up his current tour–it’s simple and straight forward. KO followed other Canadian artists on Facebook, noting where they performed. Then he methodically started contacting those venues, compiling a database. He also looked at cities he specifically wanted to play, adding them to his database. The outreach routine was and still is a relentless routine of emailing, calling, emailing, followed by a deliberate rinse & repeat. He says he also spent hours on Google looking for bars in various cities. This has become his routine process for booking outside of Toronto.

KO says his brief pitch includes what venues want, what they’re looking for, selling the event, links to live performances, social, and his bio. We also touch on a few concepts straight out of The Unstarving Musician’s Guide to Getting Paid Gigs, including schmoozing, asking for peer help, and staying on top of the changing venue landscape. KO also gets a little marketing help from his girlfriend, suburban pop indie artist Mel Yelle. Although KO feels fairly new at the game of touring, he says this year will be his biggest to date. The current leg of his tour spans seven shows in three weeks, taking him from Toronto to Nova Scotia.

We also talk about some of the not-so-great aspects of tour planning, referring specifically to artists who suffer from rockstar-syndrome and generally poor attitudes. As a tour organizer, KO deals with ticket sales, photographers, artist payouts, and more. There’s not much room or toleration for poor attitudes. In fact, he and I agree that attitude trumps talent–every time.

KO’s touring configuration is pretty basic, in his own words, consisting of two mics, a drummer and/or a DJ. He says he likes having the onstage interaction of a DJ or drummer. Funny thing is, drummers notoriously despise DJs. It could have been just for me, but KO says he thinks the onstage interaction is better with a drummer, adding that he likes jumping off the kick drum, followed by a pause. He says the crowd gets into it. And why wouldn’t they?

Check out the official video for his latest release “Death of Me.”