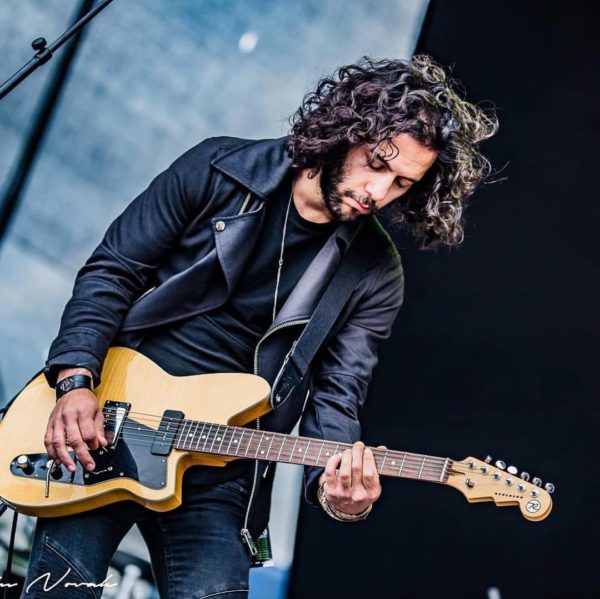 Musician Joe George (aka Joe Shadid) has a steady gig as a content producer for Reverb.com, where he creates video lessons, demos and more. Reverb is an online marketplace where musicians can buy, sell and learn about new, used, vintage and handmade music gear. A listener of the podcast and long time San Francisco Bay Area friend recently sent me this NY Times article on Joe, suggesting that he’d be a great guest interview. I reached out to Joe via Facebook, he was kind enough to schedule an interview, and he was indeed a great guest interview.

“It’s a freakin’ dream job.” –Joe George on his gig at Reverb.com

To our surprise, Joe and I are mutually acquainted with Rex Brown, the former bassist for metal sensation Pantera. His video work for Reverb not only gives Joe a steady paycheck, but also a little notoriety. Rex had seen Joe in some of his Reverb videos, and was apparently impressed. Rex invited Joe to to join his band on a tour to support his new solo album Smoke on This. Joe has had opportunities to interact with other noteworthy musicians because of his gig with Reverb, including Queens of the Stone Age guitarist Troy Van Leeuwen and Jonny Greenwood of Radiohead. Understandably he says, “It’s a freakin’ dream job.” Indeed.

Joe as an Independent Artist & Songwriter

The most interesting facet of Joe is his work as an independent artist and songwriter. He released his first album over a year ago, and this year in 2018 is working on a project whereby he’ll release a song and companion video once a month. So he’ll end up with 12 tracks and 12 videos by year’s end. This project for Joe is a great way to do something different, to collaborate with others, and to keep himself working on original music all year. Check out the first three videos at joegeorgemusic.net.

Joe has a truly varied taste in music. He’s passionate about string quartet, but has an appreciation for all kinds of popular music as well. He also really enjoys film scoring. These facets of Joe’s music all have some tie-in with his education at Berkeley College of Music. It was here that he discovered his appreciation of string quartet and found the opportunity to learn about music for film. Where his music is concerned, he comes across as an artist in the truest sense. It’s something you hear in his voice as he talks about music and collaboration.

His self admission where marketing and money are concerned, is that neither are something he’s focused much energy on. To a degree, he hasn’t really had to focus on marketing and money. His gig at Reverb has been a benefit to his marketability and success. It’s very symbiotic, I suppose. In spite of the lift that Reverb may provide to Joe’s independent artist career, he’s extremely talented. He’s clearly nurtured and has invested in his art.

Throughout our Skype conversation, I heard an the occasional sound of ice cubes tapping the edge of a glass, as Joe would pause to take a sip of a beverage. Our interview was done during the evening hours, so I couldn’t help but imagine that he was enjoying a nice whiskey, or perhaps a bourbon. It matters not. In my humble opinion, iced tea or whiskey–Joe is hip either way.