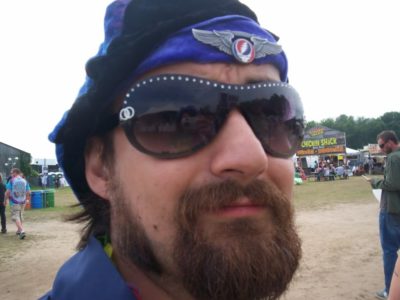 Carlos Castillo runs a Facebook community called Schwilly Family Circus. It’s a community for entrepreneurial musicians (aka musicpreneurs). It took us a while to connect for this interview, thanks to a power outage at my own home podcasting studio. As it turned out, Carlos had just become a brand new father, so he was understandably relieved by my request to reschedule. He tells me he was suffering from sleep deprivation. I understand newborns commonly inflict this type of suffering on the mums and dads. 😉

Samson (his first child) turned 3 months old at the time of our conversation and interview. Carlos says he’s an awesome baby, not a crier and very fun. He also says that the best thing about living the entrepreneurial lifestyle is that working from home gives him the flexibility to spend more time with Samson. He says he didn’t realize how good his entrepreneurial work life would be for fatherhood. This made me realize that I should ask more guests about their kids. I don’t have kids, but I know it’s a common bond among many of guests, listeners and readers.

A few years back Carlos set out on a quest to get fired from his day job–he references the movie Office Space as a good representation of how it went down. He says that he was a corporate monkey for about five years, was making good money, buying fancy toys–but feeling miserable. His enrollment in online courses for an MBA in entrepreneurial small business set in motion an eventual departure from the rat race. Carlos knew he wanted to start a business of his own. He didn’t care to participate in workplace politics, and felt that his job was a dead end.

“For those of us that are failures to leading a normal life, maybe that’s because we’re supposed to live a special life.” –Carlos Castillo paraphrasing one of his favorite quotes

When Carlos hit the 5-year mark at his job, his 401k doubled in value thanks to a company match. This was an event that gave him the opportune chance to finally quit. Rather than walk off the job, Carlos says he just stopped “doing” (a la Office Space). He spent his work hours transcribing music and making plans for what he’d do when he left the company. When he was walked to HR, he did so with his head up and a smile. He was packed & ready to go–onward to freedom. He cashed in his 401k, bought an RV and some recording gear, and started what would become known as the Schwilly family road trip.

His business idea was to start recording live shows, targeting lesser known artists. He recorded about 250 bands in 2013. Carlos knew that super fans loved live recordings, and he wanted to build a business around his recordings. He started by giving smaller bands a record of their shows, but he couldn’t figure out how to make the idea profitable. Musicians he worked with couldn’t afford to pay him, nor did they have money to pay for studio time that he wanted to offer. Next he tried burning CDs to sell at shows, but this didn’t add up to much income either.

Musicianship is the most quintessential entrepreneurial business.

Before he could get his business going, the engine in his motor home broke down and Carlos went broke. He found work on a farm, saving up the money to buy a beat up old van and make his way back home to Utah. He gave thought to a new plan, and discovered the thriving world of online music marketing. It occurred to Carlos that musicians lacked business knowledge for building a career. He also felt that many musicians lack the realization that they could build an entrepreneurial business based on their music. Many musicians were stuck in the idea that they just needed to shine very brightly and that someone in the industry would help them make it. Musicianship is the most quintessential entrepreneurial business. This is a view Carlos learned he shares with quintessential marketeer Seth Godin. Carlos combined his MBA education with information that he gathered from blogs and podcasts like CD Baby’s DIY Musician podcast to make up a new business idea. This podcast and the CD Baby blog was Carlos’ number one learning resource in the beginning. He even wrote a guest post for the CD Baby blog, which got him 500 subscribers and a helpful boost to his business.

In the beginning he applied newly learned strategies as a consultant to musicians who were willing to pay. Most musicians didn’t have the wherewithal to apply the strategies that were widely available. Some musicians were willing to hire him for help; but he realized that there was a limit to how many people he could serve in this capacity. The proverbial light bulb lit up in Carlos’ head. It dawned on him that teaching was the way to go.

Carlos started his current business during a  period when he was homeless and working from libraries. He shares this story to help musicians realize that they can start working on their own musicpreneur business from just about any point in life. There’s so much information online that it can be overwhelming and often misleading, says Carlos. He also feels that many educators are merely regurgitating, rather than applying and teaching what they’ve personally applied. The first bit of important knowledge Carlos came across in the early stages of his research, is that you have to build an email list and you have to build authority. He also learned about meeting and connecting with people via Twitter. He put together an email list, and started sharing all the articles he was finding on music entrepreneurship to his Twitter followers and email subscribers. The result is that people started looking at him as someone who was knowledgeable–an authority. At this point he was knowledgeable as an entrepreneur, but not as a musician entrepreneur. Even so, musicians started asking him questions. He in turn started using Twitter direct messaging to find out what musician’s were challenged by. [Carlos likely used a Single Most Important Question approach here.] He says that he got the important questions before he knew the answers. He knew where to find answers, but needed to know the questions. He learned simply by asking. Carlos got hired to execute online strategies for others, which lent itself to building authority. It’s all based on principles of business, he says. He used these same tactics to build his own business, then he simply translated the same principles to help musicians to get super fans. Carlos sees himself as an entrepreneur who serves musicians. His market is musicians, and the market of the musicians he serves is super fans. His authority is also in part attributed to the fact that he himself is a super fan–a professional super fan, who spent thousands on the work of other musicians.

Carlos started out doing pro bono work. Once he got the results that his clients were looking for, he started charging for his time–and his courses. He has increased prices as he’s increased the value within his courses. He initially operated solely on the need to build an email list and serve his community. Once he established his own community, his own super fans, Carlos says that all he had to do was teach his students what he learned about connecting with people. Some musicians will say things like, “This won’t work for me and my fans.” Yet Carlos used these very tactics to connect with them. He asks students to simply trust the system he’s developed and the principles he teaches. However, he emphasizes that his methodologies are more about principles than systems or technology. Carlos reminds us that technology changes, but sound principles are universal.

This is his differentiator. Many educators show musicians how to do tactical things based on technology. Carlos teaches on the basis that principles are cross platform. As technology changes, principles still apply. It’s the same in any field, he adds. He focuses most on Twitter and Facebook, which have their own unique sets of tech skill requirements. The principles that make things work in Carlos’ world can be applied to any social platform. He strives to give his students principles they can use 10 years from now, and believes that people get a lot of value out of transferable skills and principles.

“How things are done, isn’t necessarily how things should be done.”

The Musicpreneur Apprentice Program (MAP) is the flagship offering of Carlos’ Schwilly Family Musicians community. The program provides tools for developing a web presence, a custom Twitter app, WordPress website tools, a crowd funding template, and more. Carlos has designed MAP to be fully inclusive, rather than something that has lots of upsells. A key principle he teaches: cut out as many middle-men as possible. MAP also includes a WooCommerce booster (add-on) plugin, which normally costs ~$150. This plugin allows musicians to offer an option for buyers to pay more than the recommended price, something that BandCamp has proven to work well. He emphasizes that some buyers will in fact pay more than recommended price to support the artists they love. His Twitter app was developed in-house and in cooperation with Twitter, and is exclusively for Schwilly Family Musicians. Carlos also includes weekly online coaching for MAP students, plus credits for 1-on-1 coaching. He’s unhappy with much of what is being offered to musicians, and sees lack of entrepreneurial knowledge as the reason behind poor offerings. Carlos develops some of his own student tools in-house, because he hasn’t found the right tools elsewhere.

Labels & the In-DUH-stry
Carlos has branded himself as the anti-industry guy and sees major labels as no different than the corporate world he chose to leave. He doesn’t care for the way musicians are treated by major labels, which he likens to the treatment of cattle. It angers him that traditional industry has victimized musicians, although he finds many smaller labels doing good things. The DUH in “in-DUH-stry” refers to major labels and gatekeepers.  His main thing is empowering musicians with the knowledge and skills needed to take ownership of their careers–to help musicians realize they can do it on their own.

According to Carlos, the ideal student for MAP is secure in their music and adds that their music is mostly developed. He looks for people who want to take ownership of their own small business, are willing to do the work, and are creative enough to put their own spin on MAP principles. He also adds that his ideal students want to make an impact on the community they serve. Carlos believes that some people just need a leader to shove them in the right direction. In Carlos’ world, it’s all about amplifying your own weirdness… And that’s how you connect with your community.

Anything You Want by Derek Sivers
Office Space
Freakonomics