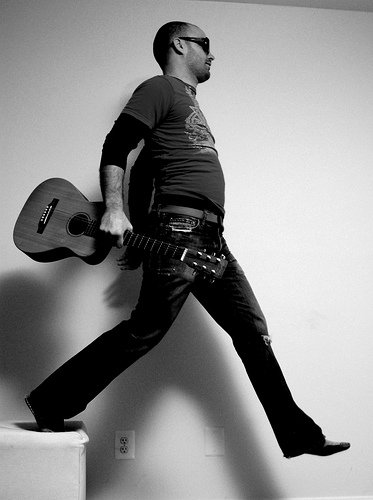 Justin Trawick is the quintessential DIY musician, but he’s just about maxed out his abilities as a one-man army. Among his many projects are his band The Common Good, a podcast, and touring with a songwriter series. These and his other projects obviously require marketing, selling, planning, logistics, coordination, etc. Justin seems highly organized, and he is. But he sees himself as over-extended. In this episode we discuss the things he’s doing to adapt, change, and grow.

Justin’s Circus Life Podcast is a project that was inspired by Justin’s memories of Love Line with Adam Carolla & Dr Drew, and radio personalities like Howard Stern. Justine is all about collaboration, so he originally created Circus Life with a friend. Today it’s a solo show that is among the many platforms on which Justin can engage with his audience.

Justin has also created a touring show called the 9 Songwriter Series. He’s proud of his accomplishments with the series, and he should be. The The 9, as it has become known, has been going since 2008. It features independent artists from wherever the show travels. The 9 performances have been showcased on the east  and west coasts of the United States. It also has a residency in New Orleans.

I love Justin’s humility. When we talked about the fact that he must be highly organized, he admitted that his music journey has been a twelve year learning experience. He shares a story about one of his most recent mistakes, involving a popular San Francisco venue he’s been in talks with about hosting a show for The 9. The story culminates in Justing receiving an email that wasn’t the good news he’d been hoping for. Justin says he dropped the ball in not communicating with this particular venue in a timely fashion. He knew he’d screwed up, so he reached out to his contact and apologized for mishandling the communication. In the end, he got a second chance with an opportunity to book a date for The 9. Key takeaway is that Justin not only admitted his mistake. He didn’t let it go. He convinced the venue owner that he was worth the second chance. The other part of this story is that Justin recognizes this as a problem that has stemmed from being spread too thin. He admits that it’s probably time he hire a manager.

Hear the track All the Places That I’ve Been by Justin and The Common Good at the end of our conversation.

Sponsorships and grants are in Justin’s sights for The 9 in 2019. He calls his plans “The 9, 2.0.” He’s collaborating with a friend on this idea too. In this case, former Unstarving Musician podcast guest Eli Lev is in talks with Justin on how the new and improved version of The 9 will look. He confesses to having limited experience with sponsorships and grants, and that’s where he hopes Eli Lev will help. This is another example of what Justin is going for with The 9–community, inclusiveness, and collaboration.

Justin sees financial support happening in the near future, because there’s a story behind The 9. It features local artists from whatever city it’s in. This will definitely add to the story and appeal that Justin is crafting for The 9. As Justin says, “How cool would it be if The 9 shows could help pay artists more?” He goes on to say that music artists are typically struggling, either financially or emotionally. For example, music artists have to be open to people saying no. He can’t necessarily help with the rejection that comes along with being a music artist, but he clearly feels that it’s within his grasp to help out on the financial side.

Our conversation is a good reminder that we should provide as many ways as possible for supporters to find us. Justin sees the Circus Life podcast and The 9 as two more platforms from which he can engage his audience. He’s looking at his music career the smart way–like a long game.

Not included in this episode is 10 to 15 minutes of Justin interviewing me about my decision to live the expat life in Panama. He did this before I got my first question in. Podcasters are sneaky that way. I smell a bonus episode for the morbidly curious.

Justin: Give yourself a moment to be sad, depressed, have self doubt. It’s going to happen so embrace it. When that moment is over, move on.

Justin: Be kind to the venue staff. Have you ever seen the Henry Rollins quote about that? Look at the image at the top of this link (Henry Rollins’ Rules for Musicians).

Justin: Play out of town more.