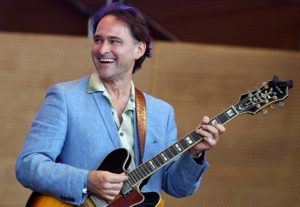 Maybe you know him from his years as Rockin’ Johnny Burgin. Maybe you know him by his new handle, The Worldwide West Side Guitar Man. Performing up to 250 shows a year in Europe, Japan and coast to coast in the US, it’s possible you’ve heard him and don’t even know it yet. If that’s the case, you’re in for a treat. Rejoining me on the podcast for the first time since his appearance at end of 2017, Johnny’s been around the world a couple times since then. He’s here to tell us about his travels, what it’s like to rebrand his name and what songwriting on the road is like.

Johnny grew up in Starkville MS and Greenville SC where he got the chance to see touring blues bands like Guitar Jr, Gatemouth Brown and Eddie Clearwater. He learned the basics of the guitar from his folk musician father and while he initially thought he’d grow up to be a writer it was music that called the tune of his life. A mainstay of the Chicago blues festival and European tour circuit, Johnny has headlined festivals all over the US. Over the years he’s developed from a blues guitar slinger and local blues hero into a fully-fledged singer, harmonica player, a dynamic and engaging bandleader, as well as a mature, seasoned player.

We kick off this episode by going through Johnny’s last year of touring before diving into:

“I keep my ears open. If I can get a good phrase then I’m halfway through a good song.”

“If they paid money, then that’s going against taking chances. You really owe them your very best stuff. But you gotta carve out a bit of risk taking within the performance so you have something for your brain to work on for going forward, so you’re not just doing the same performance all the time. Because they wanna see that too. They wanna see you take a chance.”

Pledge your support for Unstarving Musician on Patreon

The Unstarving Musician is committed to sharing the best tips and information of other music professionals to help musicians do more of what they love – make music. Our weekly podcasts features in depth discussions with musicians and music space professionals discussing music creation, marketing, and business tips. All this is made possible by the contributions of individuals like you in our shared community who love making music.

Patreon is a bit like Kickstarter, but instead of culminating in one large project, it’s a way of crowdfunding ongoing creative endeavors. Patreon also serves as a community site where supporters can communicate and discuss new creations.

*Full Disclosure: This post contains affiliate links. If you purchase products using these links, I’ll earn a small commission at no extra cost to you. Thanks for your support!