Tapping into the House Concert Scene–Robonzo

Since these interviews, I’ve spoken with Amy Killingsworth who founded and co-produces Amy & Gary’s House Concerts. Amy gave me the host perspective, so I’m privy to all kinds of firsthand information lately.   Soon I hope to have indie artist Shannon Curtis on the podcast. She does most of her performing at house concerts, and has written a popular book on the subject matter.

No Booker, No Bouncer, No Bartender: How I Made $25K On A 2-Month House Concert Tour (And How You Can Too), by Shannon Curtis

FYI: The book title listed above contains an affiliate link. If you purchase using that link, I’ll earn a small commission at no extra cost to you. I appreciate your support!

Tapping into the House Concert Scene

As Ray Prim told me, it’s not necessarily easy learning about and becoming part of the house concert scene. (Here my conversation with Ray in this episode.) In fact, Ray compares it to the Luminati. Here are some helpful tips I’ve recently gathered.

House concert hosts are invested in growing their own networks. This is because they must draw consistent attendance in order to have successful events. A successful event for hosts is a good experience for guests and the artists that perform them. While many hosts are well established, it will never hurt for them to grow their attendee list and their artist database. In many or most cases, hosts are sharing their events on Facebook and sites like Meetup.com and Eventbrite. Note that in spite of the sharing on social sites, these are private events, by invitation and/or RSVP only. House concerts are not public events, and are not promoted as such (nor should they be, for legal reasons).

Attending house concerts is a great way to meet one or more hosts. I say one or more, because there may be hosts in attendance. There may also be aspiring house concert hosts in attendance. The performing artist is undoubtedly going to know something about they house concerts community. Even if you happen to meet a performing artist at their first house concert ever, they are probably on the cusp of learning more about the community at large. This is all schmoozing and networking 101, but you get the idea. Meet some hosts, fans and artists. Ask questions and be helpful to others when the opportunities arise.

I’ll lead this tip with something Amy Killingsworth of Gary & Amy’s House Concerts says, which is that it’s all about being nice. Thoughtful communication is key here. Amy also shares a story about an artist who contacts her regularly. You want to hear this story, and you can hear it in this episode. The moral of Amy’s story is that nice, thoughtful, persistent communication to the right host can get you plugged into the scene.

You Can Build Your Own House Concert Network

Shannon Curtis has built her own house concert network by sharing her interest with her own community (i.e. her email list). She has built upon this at her house concert shows. This is all detailed nicely in her aforementioned book.

As Shannon Curtis says, house concerts done right are an opportunity to grow your audience by as many as 20 people per night. How many days and how many gigs at cafes and bars does it take to grow this much? Because a house concert is a true listening event, it’s an event conducive to making connections with your audience. As the performing artist at a house concert, you have an opportunity to speak with new fans before and after your performance. Audience interest in speaking with you will be primed by your performance and your onstage stories. They’ll also be primed to join your community email list and buy your merch–bonus. 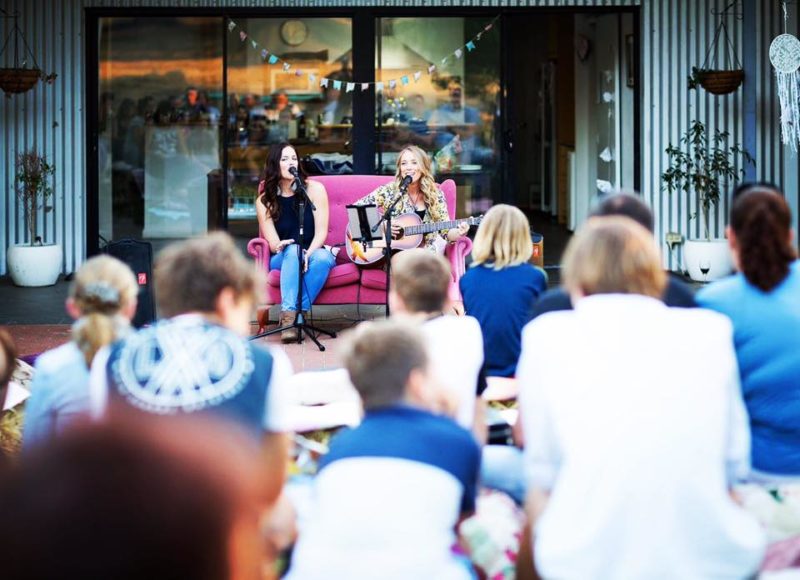 The House Concert Experience and the Fan Perspective

I said it before and I’ll say it again.

If your a fan of live music, this is a plus. If you like talking and networking, you can do that, just not during the performance. House concerts are often structured with an intermission, during which time the performing artist does a meet and greet. And they want to meet and get to know you. If you’re in attendance, you’re a true music fan. Artists are also typically hanging out with attendees before and after their performance, so you’ll have plenty of opportunity for one-on-one time. Artists love this! They truly want to get to know their fans. The smart ones will also have merchandise for sale, and will want to stay in touch with you via email. Savvy artists can even speak to you about hosting your own house concert.

Done right, house concerts are by invitation and RSVP only. Again, there are legal reasons for this (additional info can be found in the show notes listing of resources). In order to meet attendance goals that make for a successful event, hosts should invite double the number of people they want to attend. Murphy’s Law will dictate that not everyone will be able to attend, some will cancel, and a small percentage will no-show.

As the host, don’t try to do too much. BYOB and potluck meals are common place. Go the extra mile if you enjoy and can afford the added expense of entertaining. Attend other house concerts and learn from other hosts. Talk to other hosts. Borrow what works for you.

As a performer, unless you’re dealing with an experienced and established host, learn everything you can about producing a successful house concert, so that you can guide and educate your host. Promote your availability for house concerts on your website, on social, at your shows, and at house concerts. Buy Shannon Curtis’ book (mentioned above and in the show notes) for additional info and resources.

While some house concerts allow children, all will have an age limit. A crying infant will quickly kill the vibe of the otherwise intimate performances. Even a cute well-behaved 5-year old can be a problem, as they can effortlessly draw attention away from an artist performance. Performing artists and hosts want shows to be about audience/artist connection. This is what makes a truly successful house concert event.

How Artists Gets Paid

House concerts are donation based events. The common practice is for hosts to recommend a donation of $20, with the expectation that all guests pay something. Shannon Curtis has a brilliant twist on this which she details in her book. Her suggestion is to not recommend a donation amount, but to communicate that the event is donation based. She argues that this removes a donation ceiling in the minds of attendees, instead encouraging them to give what they feel the performance was worth.  Again, see Shannon’s book for a more detailed explanation. As with getting paid for any gig, there is an art to the pitch. In this case, there’s an art to pitching the donation. It may start with the artist explaining the donation basis to the host. In the other cases it starts with an experienced host announcing and consistently communicating that the show is donation based. The culmination is an announcement by the host at the end of your show. The best hosts will mention this fact in all emails and social posts about the event. Effective communication of the donation based aspect is very important to the success of house concert shows. It ensures that you the artist get paid, and it ensures that hosts are able to hold future house concerts that attract quality artists.

In addition to promoting your interest in and availability for house concerts to fans and hosts, you can join house concert networks. I’m going out on a limb here by say that this is your least desirable means of obtaining bookings. That said, I know there are artists who rely on this approach and who have success with it. The downsides are that it may involve a paid subscription, and you won’t necessarily find all of the best hosts in these networks. Again there are exceptions, but building your own relationships within your own network is going to work best every time. Shannon Curtis has this figured out also. Again–read her book! You can organize a tour in a way that’s very different from traditional venue touring. Do it right, and you’ll organize a much more successful tour doing house concerts.

If you’re in a rock, pop or dance band that typically performs shows that involve amplified volume and large ensembles, you may be thinking that house concerts won’t work for you. You’d be right, but that said, artists like Ray Prim are creating alternate ensembles and solo repertoires that are better suited for house concerts.  My recommendation is to look at your band and consider two adjustments. First, create a configuration that works for house concerts. By this I mean a three-piece configuration, perhaps a duo. Five-piece bands or bigger are not typically going to work for house concerts. It’s too much gear and too much personnel. Second, create acoustic versions of your existing material. Leverage existing material, but consider additions to your repertoire. This will make you house concert ready, plus it can make you a better musician. Scaling down creates space and playing acoustically or at lower amplified volumes enables musicians to hear more.

Amy Killingsworth says you should attend a house concert if you’re thinking of hosting one. Meet and chat with the host, borrow ideas from them, and use the parts you like to create your own experience. Amy loves to entertain. She goes an extra mile with little things like fresh flowers, but says that one needn’t do everything she does to create a quality house concert experience. I believe what Amy is saying here, is that one should create their own brand of house concert. Put your personality on it. Let it be a work-in-progress until you feel you’ve got it dialed in.

If You Want More

JOIN OUR COMMUNITY TO GET STARTED