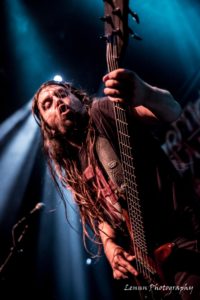 I discovered the following quote on the Facebook page of Archer Nation bassist David De Silva.

David is highly respected in the San Francisco Bay Area and beyond as a versatile musician. His versatility seems to stem from his deep appreciation for Bruce Lee the man, Taoism, and existentialist philosophy. As I discovered in my conversation with him, David strives to use the present moment and mindfulness to be everything he can be as a musician, an onstage performer, and student of life. Because I’ve seen David play, and actually performed with him on one occasion, I know that his versatility also comes from lots of passion and hard work. I met David before I’d finished writing The Unstarving Musician’s Guide to Getting Paid Gigs. This is significant, because in the book I mention a gig that we did together with another relatively young artist by the name of Mike Annuzzi. And this is relevant, because I learned some things about performing and serving ones audience from both Annuzzi and De Silva. As David and I discuss, there’s always another person from whom we can learn.

A self-taught musician with a strong grasp of music theory

David is an amazing musician, and although he has an in-depth understanding of music theory, he’s predominately self-taught. Jaco Pastorius comes up in conversation as one of his early and primary influences; but it’s progressive metal band mates and his own music students that David sites as his main motivators for learning music theory. His progressive metal band mates were so well versed in theory that he was compelled to teach it to himself. His number one recommended read on the subject is Jazz Theory by Mark Levine. As a private lesson music teacher, he’s had occasion where students progress to a point that has forced him to learn something new to maintain teacher status, thus expanding his own music theory knowledge base.

The importance of staying humble as a musician

Working as a pro musician has clearly given David the gift of expanded music vocabulary. Yet he says it’s important to stay humble, suggesting there’s always someone from whom we can learn. Playing professionally and putting in the hours has also made him very confident in his ability to quickly grasp a feel upon first exposure. This is without doubt a trait that keeps him in high demand as a gigging musician.

His band Archer Nation was nearing completion of their second album at the time of our interview. Their first album, Culling the Weak, can be found on BandCamp, Spotify, and iTunes. At the time of our interview, the artist listing for this album is simply “Archer,” in case you have trouble finding it under “Archer Nation.” Their forthcoming album is being produced by Mike Clink (Megadeth, Guns N’ Roses, UFO, and more), who also worked with the band on Culling the Weak. David jokes about being the eldest member of the band at 35. He joined the band in early 2010, replacing their original bassist. He seems to genuinely love what they’re doing on the songwriting front. We share a good laugh about his stage presence being an issue . His playing was apparently good enough, but his new band mates apparently had to brow beat him into things like lowering the height of his bass. Over time David learned that being in the moment was the key to developing his personal stage presence.

Making fans part of the family

One of the more interesting and educational parts of our conversation was on fans. David shares his thoughts of knowing all of your fans to reaching a point where it’s no longer possible to know them all. He confirmed for me that fans are such an important part of a band’s success, but not just because they go to shows or buy your stuff. It’s also because they literally show up to help the band, hooking them up with venues, places to stay, shots, you name it. These are the super fans that make up a volunteer force that Archer Nation relies on, appreciates, and loves.

David also shares his thoughts on endorsements, the record label model, where the music industry might be headed, his fear of having a “regular job,” and working with a clear mind. Like water indeed.